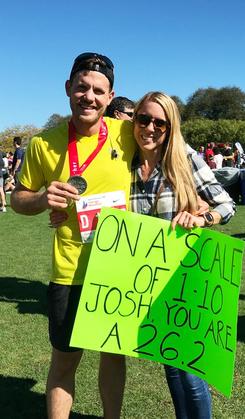 hear from some of our athletes

I never thought running would be something I would enjoy, actually I would avoid it at all costs when given an opportunity. As I got older I ran a couple 5ks for fun and started to realize I didn’t mind running as much as I used to. The farthest I had run before signing up for the Chicago Marathon was a 10k and that really pushed my limits at the time. After signing up for the marathon I knew I needed some guidance and Sarah really opened my eyes to the world I never knew existed in marathon training. With my Garmin watch and heart rate monitor, she was able to watch how my body handled training, what I needed to improve and kept me motivated with ever changing speed and conversational runs. I learned to watch my heart rate more, learned that slower runs actually help you run faster and train your body to burn fat rather than just running on what you ate an hour ago. With the knowledge I’ve gained I was able to talk my wife into signing up for her first marathon. I look forward to working with Cheetah Running and improving on my 4hr marathon time. My ultimate goal went from running 1 marathon to running all of the big 6 throughout Europe, Asia, and the US. Thanks again for all the time spent, information shared and guidance along the way!

My biggest concern going into this training back in November was the swim. I knew I could run having done the Chicago Marathon in October. I knew I could ride a bike having done numerous century rides with big climbs. I was afraid of the swim. Nick has been an incredible coach and friend. He's encouraged me all the way, he's paced me on tempo runs and a 10k test I didn't think I could do, he's ridden with me in the freezing rain, he's treaded water while I "swam". All the time telling me I could do it. He understood when I struggled emotionally after a DNF in May and let me work through it. Every time he gives me a race plan I tell him he's crazy, and then I'm able to accomplish it. Now I'm going into IM Boulder confident in my swim, ready to enjoy the bike, and looking forward to the run to the finish. Nick, THANK YOU for everything you've done for me this year!

I admit that at first I was skeptical of some of the elements of my training plan - especially the part where I had to run most of my runs way slower than I was used to running - but the intelligence of Nick’s training plan proved itself tenfold when it came to every race I ran. Within my first three months of training with Nick I PRed my 5K and 10K by several minutes and when the marathon came, not only did I finish feeling great but I also placed in my age group and qualified for Boston. Nick is incredibly knowledgeable and devotes a lot of time and attention to each of his individual clients. He is invested in each athlete’s success, safety and personal growth and does a great job explaining the purpose of various workouts and the overall design of your training plan. I asked Nick to coach me again for my second marathon later in the year, got even faster and re-set all of my race PRs once again. I’m looking forward to venturing into triathlon in the year ahead with Nick as my coach.

I worked with Nick to support my preparation for my first ever Ironman (IMWI) and cannot thank him enough for helping me get race-ready.  Having completed many small sprint-distance races, I was not new to triathlon; however, I also was not sure how to succeed in preparing for a race of Ironman caliber.  It turns out that I did not fully comprehend the importance of intelligent training until we started working together.  As race-day drew closer, I was extremely confident that I was ready.  The fact that I finished without injury 12hrs 39mins after the cannon went off was not an accident.  It was a direct result of the disciplined training approach and the accountability that Nick provided.​